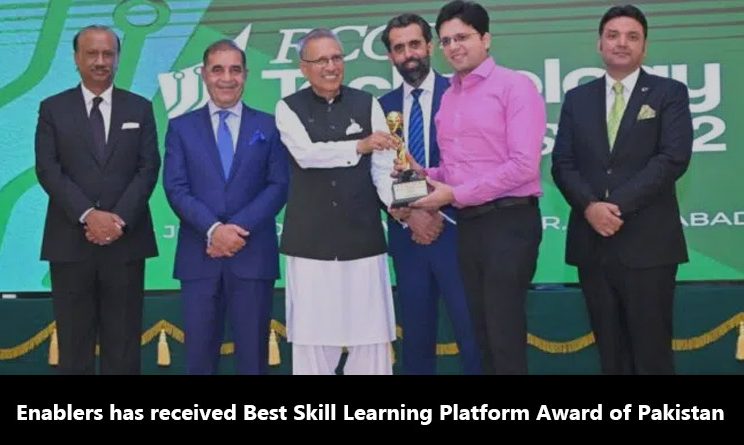 In a ceremony held in President House, Islamabad on June 9, 2022, Enablers was awarded the ‘Best Skill Learning Platform of Pakistan Award’ for its services and community impact. President of Pakistan, Arif Alvi, presented Chief Executive Officer Saqib Azhar with the distinguished award for their outstanding achievement and significant community impact in Pakistan.

Saqib Azhar presented his vision and objective with CEO Enablers, which is to assist Pakistan by empowering young by creating multiple job possibilities, imparting entrepreneur skills, and improving the socio-economic situation of Pakistani youth. Enablers, he claimed, is guiding Pakistanis toward business growth, operating on the world’s largest marketplaces, and becoming successful entrepreneurs.

Enablers has been working hard since 2018 to generate two jobs for youth who are now unemployed. Thousands of people have used this platform to master E-commerce entrepreneur skills in just four years, and their students have already generated more than $150 million. Their efforts not only expanded Pakistan’s exports, but also increased the circulation of foreign currency, opening up new routes to Pakistan.

The ‘Best Platform of the Year’ Award is a one-of-a-kind honor for a company that has been acknowledged as a leader in its field. Every year, the award is given to a single brand in each category, and this year’s winner is Enablers.